Kid Courageous is a young band from Sydney, Australia. They were signed to the independent label RockSugar Music in 2004 and have distribution through Universal. Their style of music is variously described as "pop-punk" or "piano punk". I'd personally describe it as basically punk-flavoured pop, rather than pop-punk, with a piano thrown in. Kid Courageous have had ARIA top 50 hits with their first singles, "Is She Really Going Out With Him?" (a cover of Joe Jackson's song), "Life's a Movie" and "The Use Me EP". Their fourth single, "I Want You", was released on iTunes only. Their debut album, "Dear Diary", was released in May 2006 after the date being pushed back several times. 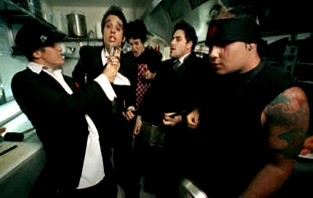 Kids in the Kitchen: KC in their music video for "Is She Really Going Out With Him?", 2005