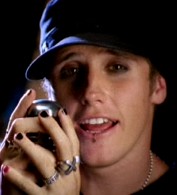 Lead singer Mick is sometimes slightly clueless and slightly cute :). And he's pretty much never seen without a hat. He says he only has about 15 hats though~ And apparently he does have hair under the hat, which is good...

And if you heard the Gaelic toilets rumour, it's not true so don't go to the official forums and start bugging him about it. It annoys him.

MICK: [indicating the CD he's just signed] Is this yours?
JA (fan): [nods]
MICK: Oh, sorry, I put hugs and kisses on it. I won't put them on this one then. [indicating the one he's signing]
JA: Um... what's wrong with hugs and kisses?
MICK: Well, you know, some boys don't like those things.
JA: But I'm not a boy.
[PAUSE]
MICK: It was the short hair! Your hair made me think you were a boy at first but then I immediately realised you were a girl. [He adds XOXOXO to the CD.]